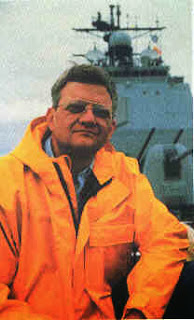 Tom Clancy died today in Baltimore. I will miss him and so will the publishing and entertainment world. Through his creativity and storytelling we have incredible characters and stories that ring true today even in the so called ‘real’ world. His stories were plausible and even prophetic. Everyone knows who Jack Ryan is. Every writer wants Sean Connery, Harrison Ford, and Ben Affleck to play their main characters. We thriller writers want to be the next Tom Clancy.

But he also famously told new writers:
“I don’t recommend writing as a form of employment, because it’s such miserable work,” he said in an interview. “That’s how you tell a rookie: if they actually think the writing’s fun. I guess it is for the first one or two, but after that it just becomes miserable work, like digging in the dirt with a shovel. But it’s something you have to do. You can’t not do it.” (From Time)
http://entertainment.time.com/2013/10/02/tom-clancy-dead-at-66/#ixzz2ga88Fv6u

Every writer brings first their imagination to the story and then the archaic crafting and wordsmithing begins. And if this is what Clancy was talking about I can sympathize. The story is often easy, a few paragraphs and there you are, roughed out, voila! But it is the grind of 1,500 to 3,000 words a day, on days when they’re not there, that’s what he’s talking about. It’s the publishing contracts, the need for the manuscript to the publisher in 60 days, the endless editing and revising, and it’s the ‘next’ one that needs to be started.

He was the consummate story teller, timely, crisp, relevant, and even heroic. In a time in the genre where the heros are broken men with issues, it’s always good to know that Jack has our back. I have a shelf with his books chronologically set in a row, all hardcover, it is imposing. I have other authors stacked that way as well but his are always thicker, and like his stories, richer and heavier. Sometime when I’m stuck on some phrasing and pacing, I’ll pull one of his books and read. The prose is clean, sharp, driving. There no cheap stuff, no unnecessary frills, no tawdry nonsense.

The legend goes that Ronald Regan was asked what he was reading and he said “Red October,” and Tom Clancy’s career was started, but one book does not make a successful writer, he wrote and co-wrote dozens of books after that. Each, with few exceptions, exciting, thrilling and satisfying.

This is my genre, the thriller. My characters aren’t out to save the world, but I still try to bang out a story that captivates and entertains. What more can we do?

Elmore Leonard, Vince Flynn, Tom Clancy all gone too soon. Their stories and their pens will be missed.