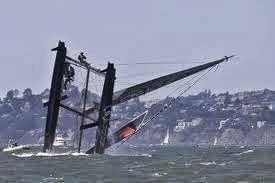 Today is the last day of the America’s Cup on San Francisco Bay. Who would have thought it would become something so dramatic and nail-biting (hyperbole intended)? Down seven races Larry Ellison’s Oracle team has surged over the last week to tie the Kiwis and with a great race today, retain the cup. Amazing! Almost two years ago I thought that it would be fun to pull together a story that uses the America’s Cup as the background to an international thriller with our girl, Sharon O’Mara, taking the lead and bringing the bad guys down. And with style and in a sexy green gown.

This the race has not been without controversy and criticism,especially here in the Bay Area. From the expectations and money spent by the City of San Francisco as it tried to be a willing partner three years ago while it came to grips with the Recession and the overt arm twisting by the race organizers, most Bay Area residents were expecting a dud of a race. Much can be written about the politics and the on-shore activities – but the races themselves are thrilling and now without peer in the world of high-tech sailboats. This is also the longest competition in the race’s storied history of more than 150 years.

My idea for 12th Man For Death was to expand the race into a story of international espionage and intrigue with a layman’s (and non-sailor’s) view of the race’s history and worldwide interest while combining it with some very cool stuff in Venice and the Bay Area.

Call it:
GRIT LIT FOR CHICS!

And the guys loved them too.

Sharon O’Mara is hired for a simple job; find out who killed the great America’s Cup skipper and technical genius, Catherine Voss. Was it out of envy and greed? Or was it an international scheme to steal her high-tech boat? Catherine’s twin brother wants answers.
As the ultra-rich battle for the America’s Cup on San Francisco Bay and the canals of Venice, Sharon must fight to find the truth. But who would kill for the secrets hidden in the technological heart of the lightning fast hydrofoil? Will Sharon discover who is behind this before they kill her? Can she outwit the bad guys and stop World War III?

Here’s the review by Midwest Book Review (on the whole series):

The Chronicles of Sharon O'Mara is an exciting, action-packed series of danger and intrigue featuring the tough yet sexy Sharon O'Mara, a thirtysomething (hey, who's counting?) ex-Army cop who can't overlook the injustice of a cold-blooded murder. In "Land Swap for Death" (9780982837610, $15.00) Sharon resists the soul-sucking greed of the insurance company she works for to uncover just why a man had to die in a parking lot, leaving behind a tangled real estate debacle.  In "Containers for Death" (9780982837634, $14.99) Sharon investigates the Chinese Tongs and Mexican Cartels engaged in a merciless smuggling operation involving steel containers floated across the ocean.  In the Global eBook Awards finalist "Toulouse for Death" (9780982837696, $14.99), Sharon's mission to return a priceless stolen painting to its rightful owners embroils her in a winner-take-all battle against a lingering Nazi SS who will stop at nothing to begin a "New Reich"; and in "12th Man for Death" (9780965651059, $14.99), Sharon's murder investigation of a skilled American Cup skipper and technical genius uncover a sinister plot to trigger World War III! In addition to their softcover print editions, all four exciting suspense stories are available as inexpensive ebooks. The Chronicles of Sharon O'Mara is a "must-read" for anyone who enjoys high-octane mystery-thrillers, highly recommended!
Michael J. Carson for Midwest Book Review

All are available in paperback and ebook formats by clicking on the icons left and right.

You will have a ball.