Inspiration – A Gift from the Gods 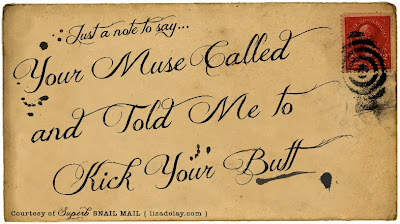 I’ve been asked repeatedly when I give talks at book signings and at readings: Where do you get all the crazy fantastic ideas for your stories and characters? I feign some sort of humility and say they come in a flash of inspiration from my muse (the other redhead in my life). But, in all reality, they often do come in a flash, then are chewed on and mentally ground up like idea hamburger, then when the time is right pounded into a manuscript. Such is the luck of non-linear thinking by yours truly.

I have also found that story ideas arise from a lot of sources, external and internal. I even wrote a short story (soon to be a full length mystery) from a very lucid dream. Sources like that make you wonder about inspiration. Back in the day these inspirations were often attributed to a muse or other outside influence, that may still be true today but more can be found just by trolling the internet or pushed by an advance by a magazine or publisher.

Below are some of the sources for many of my books, but I’m sure you have your own magic when it comes to source material. I remember during an interview that Steve Allen, the late gifted writer and comic, said that he carried around a notebook and then later a small tape recorder so he could preserve his inspirational moments; today, with your phone, the ability to keep an idea is just an app away.

Personal Experience
It is said that a writer’s first book is autobiographical or to some degree sourced from their past. I have to admit this is true in my case. Elk River, the award winning novel is based on my summers in Michigan in the 1950s and people I knew then; yet from that material (twisted by time and memory) I altered facts just enough to make for greater conflict and interest. I then pulled some of today’s social issues of gay recognition and acceptance into the story to add relevance in the farmland of Antrim County, Michigan. Many have loved the story.

In the first O’Mara Chronicle, Land Swap For Death, I focused on land developers and politicians - something that I have found go together like thick bread and sticky peanut butter. My forty years of experience in the construction industry gave substance and color to the characters and the story line.

Historical Addictions:
I am an avid reader of World War II stories, histories, books, movies, documentaries and even some of the current great web sites. The inspiration for Toulouse For Death, a thriller about the billions in gold stolen by the Americans from the Germans at the end of the war came from this very true story of the greatest theft in the history of the world (see the book The Monuments Men and soon to be released movie). I wove it into a historical piece and then a mystery that ends up in today’s modern world of stolen art and neo-Nazis. The headlines of the current discovery of stolen World War II art is intriguing. If it weren’t for the fact I wrote about it before the discovery means I can’t say, “Ripped from the Headlines!” Quel domage!
Current Events and Marketing
Often a writer has the opportunity to tie their story to current events and politics. Witness the profusion of books about the NSA, terrorists, CIA, and cookie cutter heroes and villains. The usual terror from outside the United States is vanquished by our hero or heroine thus making the world safer; but they are all just another Captain America rewrite. Then again you can’t make up stories like Snowden, Wikileaks, and the NSA spying. Fact is stranger than fiction. I chose the benign Americas Cup race in San Francisco Bay as an idea source for the international thriller 12th Man For Death. Both because of the event’s venues in America, Naples, and Venice but also for its marketing tails and the fact that it includes huge egos and great sums of money, all spectacular idea sources. And now with the American win I may get another shot at sales when it comes around again. Happy day!

I keep an ongoing folder on my computer’s desktop that says Story Ideas. I post a quick note about a thought, or an article, or even a web site that might be mined later for a story. But like all prospectors you have to dig a lot of holes and sieve a lot of pans before finding gold.

So keep track of your ideas, follow leads, read a lot, and even watch TV (there’s a lot out there and not all of it is exclusively on Masterpiece Theater). Everything out there can be made into a story, it's the writer that makes it interesting.

10 Reasons Not To Self-Publish


1. You are a traditionalist. Writing is your life and you cannot be bothered with all the minutia of bringing your work to the public. THAT is why there are publishing houses out there!

2. You don’t have the graphic skills necessary to create a finished marketable product from your story or know how to find those that can help make your book real.

3. You don’t have the time, you want to write and only write. And you know that if Dan Brown can be published you have a very good chance of getting your stuff into Barnes & Noble too.

4. You are not organized. As you write you can’t envision what your book will look like in its final form.

5. You have a relative working for one of the big five publishing houses who actually thinks your work is good enough to champion the piece before the editors (his bosses).

6. You are broke, living in a French garret two blocks from the Moulin Rouge. The rent and the cold are killing you but the words just flow, that’s what your role model Hemingway did and look what he became.

7. You are not a fan of Facebook, Twitter, LinkedIn, Pinterest, etc. You think they are mind and time sucking holes in the universe and you are better than all that.

8. It will cut into your drinking and alone time. You need to puzzle out the next complication of your story, not try and find an ISBN number.

9. Your unemployment checks will soon stop (a conscience decision to leave that crap job and make a name for yourself like John Grisham) and you just know that the next rejection slip will not be a rejection slip but a contract. No one in their right mind can pass up your manuscript and you mention that twice (for emphasis) in your cover letter.

10. Your mother told you again they will be remodeling the basement and your desk and cot are not included in their plans. You remember fondly the two weeks you spent riding BART trains through SF Bay Area scribbling in your Safeway notebooks dreaming of that Scribner contract just before she told you that you could move back into the basement the first time.

There are many options that help you bring your book to life, from traditional publishing and agents to self-publishing and the many levels between. It has always been my take that each has its value and purpose depending on the writer and the story. Neither is necessarily better than the other but going traditional is a lot more frustrating. Self-publishing can potentially and personally cost more since you have to cover all the costs for editors, book designers/builders, cover designers, even shipping and marketing. But you are in control, you make the decisions, and you willingly can live with the results. And remember, most importantly, you also own the whole product.