First Five Star Review Is In

The first five star review is in for Diamonds For Death as well as another glowing four star review. I am thrilled. Sales are brisk, but Sharon wants more readers and friends. So order yours today, either paper of ebook from Amazon. And she is also available through Smashwords. Have a great weekend.

Best friends Kevin and Sharon landed lucrative gigs that would see them cross several borders to fulfil their clients' needs. Sharon was contracted to retrieve the family of a Cuban baseball player who had escaped the watchful eyes of his handlers 10 years ago and defected to America, leaving behind his mother, wife and son. In an attempt to force him to go back to Cuba, the government had taken his family hostage, and they were now living on an isolated farm under tight security. Kevin, on the other hand, was hired by an insurance company to fly to London and review security protocols and give advice on how to close any gaps in anticipation of a large shipment of diamonds from South Africa that was susceptible to a heist. As the two friends set off in opposite directions to embark on their respective assignments, little did they know that they were going against a common enemy.

Diamonds for Death by Gregory C. Randall is a fiction tale set against the background of post revolution Cuba and how Fidel Castro's efforts to keep resources and talent at home frustrated some of his people and were at times undermined by his own people, with some of them using their government positions for their own gain. The story had an exciting plot that entwines two stories from different parts of the world and blends them into one captivating novel. It was simply amazing how Gregory C. Randall linked the two assignments, highlighting each part without taking the shine away from the other. Diamonds for Death is truly a page-turner that will take you on an amazing ride across several borders.

Diamonds For Death: Sharon O'Mara Book Five is the continuation of the dynamic team of Lieutenant Sharon O'Mara and Kevin Bryan. O'Mara is now financially successful after a series of lucky breaks and decisions, but her life is still action packed with high profile, dangerous jobs. She is enlisted to help the great Cuban baseball player for the San Francisco Giants, Toribio Rodriquez, get his mother, his wife, and son out of Cuba. When he defected to the United States after being recruited by a popular Cuban baseball player, Eduardo Mendez, his family were taken away and hidden for nearly a decade. Bryan, in turn, has been offered a job in London in a case involving millions of dollars of jewelry. In a weird twist of fate, both their cases are intertwined with Marta De La Vega, who works with the Cuban baseball teams to help stop Cubans from escaping their team. De La Vega is involved in the high stacks trafficking of Cuban tobacco, the movement of arms, and diamonds. With the help of some past allies and buddies, O'Mara sets off to Cuba to free Rodriguez's family from De La Vega's work camp.

Author Gregory C. Randall writes his O'Mara series with a lot of rapport and camaraderie between the protagonist/heroine Sharon O'Mara and her partner in crime, Kevin Bryan - along with past friends Bobby Gillis and others. This is an action packed series that has an unlikely heroine with a military past with two tours in the Middle East to lead the action. This series is very entertaining, combining baseball with intrigue and suspense. I recommend this series to both men and women!

Diamonds For Death - First Review In

Diamonds For Death: Sharon O'Mara Book Five is an international thriller written by Gregory C. Randall. While this is book 5 in the series, the author gives enough background for this novel to be read on its own. Sharon is independently wealthy now, thanks to the bequest of her friend and former client, Alain Dumont, but she's still intrigued by the story of Eddy Mendez, a baseball scout and close friend of Toribio Rodriquez. Mendez had been instrumental in Rodriquez' defection from Cuba, but his promise he made to the baseball player about getting his family out of Cuba had been impossible to fulfill. When Toro defected, his wife, mother and young son were secretly removed from their lodgings, and they became the unwilling guests at a coffee plantation owned by a corrupt Cuban official. It's been ten years now since the family was together, and Sharon agrees to help get them reunited.

Gregory C. Randall's international thriller, Diamonds For Death: Sharon O'Mara Book Five, is an exciting and fast-paced story that follows Sharon and her friend, ex-cop Kevin, as they embark on different projects which turn out to have threads in common. I enjoyed both Kevin's travels in England and his efforts to protect the diamond shipment and Sharon's Cuban adventure, but the real stars of this book for me were the baseball players. Randall's descriptions of Toro at bat are superb -- one really gets the feeling of being there in the stadium. The Iraq flashback sequences were also vivid and moving. Diamonds For Death: Sharon O'Mara Book Five is recommended reading for thriller fans. 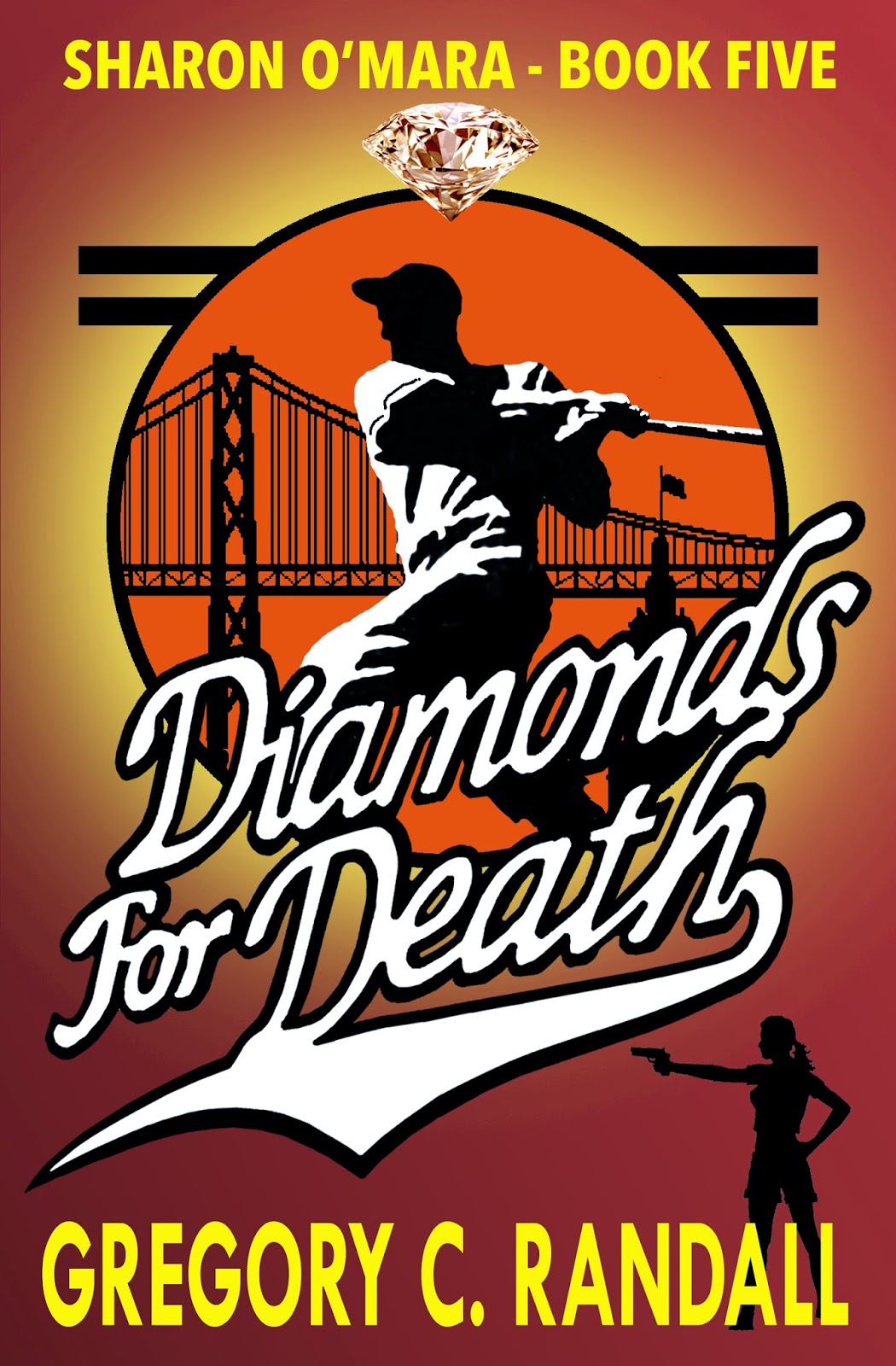 Sharon O’Mara’s newest client doesn’t need her help for what he’s done, but rather for what he left behind. When baseball great, Toro Rodriquez, defected he had to leave his wife and child in Cuba.

Now a ruthless government agent whose allegiance isn’t to Castro, but only to herself, holds them prisoner. Since O’Mara’s friend, Kevin Bryan, is off on a security gig in London to prevent the theft of diamonds worth a quarter of billion euros, she turns to old friends and comrade-in-arms to help rescue Toro’s family. Her team’s failure may mean vanishing into a Cuban prison or . . . worse.

O’Mara and Bryan have no idea their client’s paths will not only merge but crash bloodily into each other on the night of baseball’s All-Star Game in San Francisco.

Who is Sharon O'Mara?
Red haired, athletic, bold and brash, Sharon O’Mara is the woman every girl wants to be and every man’s fantasy. Honor and loyalty are the sharp edges of her nature, yet there is a passion about her that warms even the coldest heart. Independent to a fault yet steadfast with her friends, she takes on only those jobs that can and will make a difference. She is a tough rebel with a caring soul.

This book is available through Amazon in ebook formats for Kindle and in trade paperback.