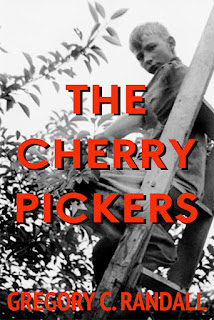 Today August 8, 2017, the young adult novel The Cherry Pickers is now available at the following locations.

I am thrilled about this book and while aimed at the fourteen to eighteen year crowd, adults have raved about it.

Autographed copies are available, just send me an email to rpd@lmi.net. They are $17.00 and include postage.

I'll also be signing books at Book Passage in Corte Madera, California on October 20, 2017. Hope to see you there.

This Tuesday I’ll be publishing my ninth book, The Cherry Pickers. It’s available at all the usual outlets and on-line sites. It is also available through Barnes & Noble and Amazon in paperback. With Prime I think you will get it in 3 or 4 days. Great summer beach read, especially for you Mid-westerners who vacation in Michigan.

Here’s the blurb:
Gregory C. Randall weaves a tale of secrets in northern Michigan during that hot and stormy summer of 1956. With the constant fear of nuclear war, an exploding Middle East, and memories of World War II still fresh with flowers on soldier’s graves; a young man realizes that he is growing up. In Howie Smith’s world of primal forests, orderly orchards, and Lake Michigan; he learns about life and begins to understand death. A crazy aunt, a dying uncle, and the unyielding pressure to bring in the demanding crop of cherries, forces Howie to realize there is more to life than baseball.

Randall unveils, during this brief summer, a family’s fears and triumphs. He explores a region of America left apart from the chaos of the world. It is a place of unwanted migrant pickers, backwoods people who must live off the land, and the grand lake that encloses them all. But Howie discovers it is also a realm of miracles.

I loved writing this story, the characters, and of a land that once was. It was a strange decade between WWII and the Vietnam War. The country was flexing its geo-political muscles as well as its economy. In many ways, America and its cool sense of fair play, saved the world from retributions and vengeance at a scale never seen in its history. What the victors did to Germany after WWI (The Great War), eventually lead to WWII. And the machinations of Japan throughout the Far East, led inexorably to the whole world being on fire.

The 1950s were the Eisenhower years, some say the do-nothing years, but in reality it established the principles and ethics for the next twenty years (good or bad depending on your politics). Business growth exploded, the suburbs were born, cool cars hit the streets, and it was the beginning of rock and roll. Kids were everywhere, and families were now dealing with separation anxiety. It was the period of America’s internal diaspora.
Posted by Gregory C. Randall at 8/05/2017 No comments: