I become a Gabriel Allon fan, it has taken me a few of Silva’s books to get here, but after The English Girl and now The English Spy, I’m hooked. In The English Spy, Silva takes us on a tour of nastier underside of Europe (and some of the nice spots as well). From the dark alleys and country lanes of Northern Ireland to the sunny ruas of Lisbon, there are no shortages of touristy stops and dead (as in body) ends. London, Rome, even Corsica come into play as an international terrorist and bomber, who works for the highest bidder, pushes his way back into Allon’s tragic past. All the big players are here: British intelligence, Israeli Mossad, Russia, and the IRA. As usual Silva plays his spy games across the world.

If there is one complaint is that Silva has become more brutal. There seems to be a moral ambivalence seeping into his characters, and sadly Allon as well. There was always a morality and justification to Allon’s assassinations, in this book it seemed to be more about vengeance and retribution, anything goes in trying to find the killer of women, children and possibly the man who killed Allon’s son and destroyed his wife.

As always Daniel Silva leaves the door slightly ajar at the end giving us a peek into the next chapter in Gabriel Allon’s life – as father and head of Israel’s intelligence operations. Boy, is Allon’s life about to get complicated.

I give it a strong recommendation.

Sometime a book just grabs you from the start – and as a writer it make me soooo jealous. Andy Weir’s The Martian is such a book. What would you do if trapped on a desert island: Robinson Crusoe, Cast Away, Lost? That story has been told a dozen times. What would you do if abandoned on a planet that is 70 million miles away from earth, has no air to breath, is colder on a summer day than the most frigid winter in Antarctica? Most likely we would all be dead after whimpering for a few months until the food runs out. Not Mark Watney – so sir, he—in the best MacGyver tradition—literally makes life on Mars bearable and survivable. This is a story of creative destruction, adaptation, politics (yes, there is an Earth component), loneliness, defeat, and great triumph. Heroes abound, there are no bad guys (other than the damn planet that is trying to kill him every second of every hour of every day). The Martian is a great read.

Mr. Weir does a spectacular job with the technical details, while I have no idea if his jury-rigged contraptions are real; I’ve not heard one word from the science community that what he presented wasn’t plausible and possible. You can believe this book; you do believe that this can or will happen someday in the near future.

I also admire Weir’s tenacity in getting this book published, first serialized on his own website, then to Amazon (where it made its mark) then to Crown for a tidy (though I think low) sum. Now it’s to be a Ridley Scott and Matt Damon movie out in October 2015. I listened to this book through Audible – one of the best reads I’ve heard- - it won an Audie Award in 2014. All I can say is great job and I recommend this to anyone – geek or not.

A must read recommendation.

STATUS REPORT - WHAT THE DEVIL HAVE I BEEN DOING?

It has been a while since I’ve updated my readers on where I am in the world of publishing and what projects I am working on. It has been a busy year posting new books online, setting up print versions, scheduling books on new promotion avenues and beginning research on a couple of new thrillers. 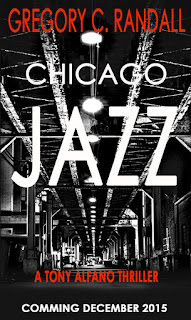 So here we go:
Diamonds For Death was released in January for both print and ebook sales, we did a promotion and book signing at Book Passage in Corte Madera, California on February 15th. All to the good, reviews have been outstanding, sales could be better, but it’s not the content it’s the marketing department (since I am the marketing department, I need to set up a meeting and kick some ass).

I brought out a new character this spring and the start of a new series. Anthony Alfano, (Tony to the few friends he has), is a veteran Chicago police detective during the Depression of the 1930s. Chicago Swing begins with seemingly random and brutal bombings in downtown Chicago in the weeks before the start of the Century of Progress World’s Fair. Tony has to fight corrupt Chicago politics and the remains of the Chicago underworld to find the bomber and stop them before they kill thousands at the fair. The reviews have been great, and I was thrilled when one called it killer Noir. I have just finished the first draft of the next book in the series Chicago Jazz. Should be out this winter. These are short and fast paced, word count at 60,000 (most thrillers are in the 95-110,000 word count – or more). For now this is only available in ebook format from Amazon – click the cover in the above left column and it’s yours for $2.99.

By the way, I have also dropped all the ebook prices for the Sharon O’Mara books to $2.99. The only exception is Land Swap For Death (where it all began) that is still at $0.99. Click the covers and they can be yours.

I have my World War II thriller This Face of Evil on the desk of an agent who has promised to read it. I believe in promises, I believe in this agent. But I also am not going to sit around for months waiting. Unlike wine, a good book does not better sitting around unread or unpublished. It wants to live in the real world of readers. I will remain patient for a time, and then we will see what happens.

Future Work:
There is a great character in This Face of Evil that wants (is demanding) a sequel, and I may give it to him. Something dealing with the end of the WWII and the impact it had on the countries surrounding the Mediterranean. Even though it was almost seventy years ago much of the nasty mischief by Hitler and his association with radical Islamists is still with us. So there is much to research and develop.

Current research is going into a new contemporary thriller that takes place over four days in Venice. A new character—a Cleveland cop—is running away from a failed marriage (her cop husband has been sent to jail) to Venice. She does not find peace and escape but gets caught in the middle between the bad business of the Balkan war, Cleveland gangs, and the FBI. It already has me hooked.

Sharon’s on vacation—or at least that’s what I tell myself. After five books in four years she’s off on one of her “me” times. At least that’s what her emails brag about: big fish, suntans, scotch, and a Frenchman. But there is a rumor that the next Sharon O’Mara Chronicle will take place in Ireland, includes an important birthday, a castle, smugglers, and a very nasty Albanian bitch. Just saying.

Publishing:
As always we are trying every imaginable idea to push the books out there. The recent idea of book promotion sites (Freebooksy, BookBub, Booksends, etc.) is working—at least to a degree. Right now getting our name out is as important as real sales. In mid-June we did a free book release of Toulouse For Death that had almost 4,000 downloads. Not bad for an investment of less than $100. And a lot cheaper than putting together a book tour where only three people show up.

We are looking, for now, to release the Tony Alfano thrillers as ebooks, thus saving both time and investment in paper. While we use paper book distributors such as IngramSpark and CreateSpace (both print-on-demand), I still have to manufacture the InDesign files, formatting, and cover art. All time consuming. I do use the cover art as a reference for the book (often generated in the middle of the draft) to help me visualize the book (the Chicago Jazz cover above is an example). But for now the world is ebooks for thrillers, crime stories, and mysteries (and romance and erotica—so I’ve been told).

I have a very busy fall ahead of me. If I meet my goals I will be one very happy and mentally exhausted fellow.