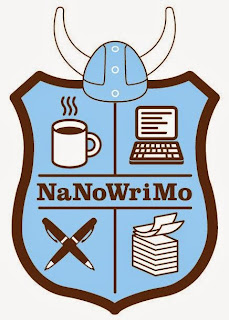 The start of National Novel Writing Month (NaNoWriMo) is only two days away and according to its web site over 178,892 writers have already signed up – very cool. November is also what might also be euphemistically called Writer's Procrastination Month, lots of social things on our plate so we tend to set the current manuscript on the side until the holidays are done. So someone invented NaNoWriMo  as a self-medicating challenge to see if one can start and complete a real novel in one month - thirty days. That’s it. The rules (at least those not challenged by the whole NoNoNaNoWriMo subgroup) are that it must be a completely new piece, started from scratch on November 1 and pencils/keyboard down on November 30 at midnight. It must be a minimum word count of 50,000. I am not sure whether editing is allowed after completion – your call.

Well, this year as in the past, I am not participating. Not on strike mind you, not “I’m better than that” either, it’s simply that after two novels written this year and another one half done, I don’t need the challenge and besides the tips of my fingers are still blistered. For many the exercise is a thrill ride, a contest like learning to play golf in thirty days (which is of course impossible). Shank, hook, slice and all you need is a hole in one on the last day to call yourself a professional. Writing is hard. Any writing is hard. Poems, psalms, instructions for your iPad, novels, thrillers, directions to Safeway, romances, erotica, books on dogs, books on cats, books on lemmings – it’s damn hard. I know after seven books, how hard it is.

One month, 30 days - shoot for 1,700 words each day. That’s it. The idea is to keep it going until done: think, write, write, think – do again. If you outline you won’t get it done, too time consuming and distracting. This isn’t some stream of conscience existential exercise, it writing a story – a complete story. Beginning, middle, end, and done. If you’re into it (and that happens), write more but not after midnight November 2013. But at some point you have to start thinking of the end, the denouement, the final gotcha. Is the bad guy caught and punished, did he/she get the boy or the girl, did the train really run over our heroine as she was tied to the tracks, or not? And whatever happened to that character in chapter two?

It’s about pacing and structure, there isn’t time to finagle with the unnecessary bits, the parts no one wants to read anyway. Push forward, strive for a cliff hanger every chapter, leave them wanting, demanding more, show them the curtain but don’t open it until the drum roll at the end. It is a fun exercise and if any of you dear readers have published your NaNoWriMo drop me a comment, I would like to know how you did.

I won’t be participating, I already wrote one book this year in less than six weeks at 60,000 words. It was my version of NaNoWriMo, it just was in August not November. I hope to have it out this winter, cool detective story set in Chicago. And yes this speed exercise forced me to write crisp and sharp, not a lot you don’t want to read. I’ll let you know when it’s available.

A book in a month is a trick play but it will teach you discipline, editing on the fly, and how to keep your spouse happy when you disappear for hours into the Bat Cave. There will be payback she assures me. With Thanksgiving being late this year, I see a lot of dangerous editing going on for those five hours the bird is in the oven and the deadline looms only four short days away. Just saying.