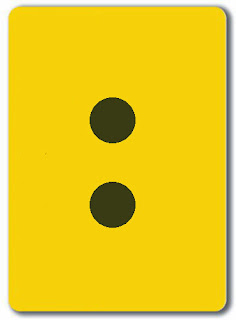 I am the last person one should ask about punctuation. Quotation marks, commas, apostrophes, dashes, semi-colons, all send shivers. I have written about the rules (thank goodness there are such) and the many very good books on the use of these various scratches that control the verbs, nouns, pronouns, and conjunctions that fill our work. Without such policemen our works would devolve into a frat party on the first/last day of school. So I diligently follow these rules and rationally applied them. Then I was gobsmacked.
Doing some research on the 1930s for a detective story I’m finishing off I thought it wise to return to the master of the genre back then Dashiell Hammett. So back to the shelf and The Thin Man. And there is was in the second paragraph.

Can you believe a colon being used for an attribution? I was shocked and still am. Is this correct? Was it correct back then? Was Mr. Hammett being overly influenced by alcohol or some other, at the time, illegal substance? I really don’t know, but I kind of like it. By the way he uses it throughout the book when the attribution precedes the quotation, all neat and professional like. I’m sure there is forgotten rule lying about, lost.

Cover Art:
Outside of some very obvious ugly book covers (I’ve my share) and the desire to save money, indie writers who do their own book covers are a naïve and foolish lot. We have a single purpose goal to express our work through a single image – get it all out there. Yet we fail miserably most of the time. Here are some very basic rules (the better ones come from Joel Friedlander – GO HERE)

1. Remember that today for Indie writers especially, their market begins when the buyer looks at a postage stamp sized image on their computer. Can the title be read (without 2.00 glasses), can the author’s name be read, and is the image itself clean and discernible. Check out Amazon’s thriller listing and you will see what I mean, then pin your work on the wall and look at it from across the room.

2. White covers are great on bookstores tables but awful in the white space of the world of digital book lists. Give the cover some color to separate it from the normally white background.

3. Typefaces have started wars in the indie world (and most probably in the publishing world as well). I advise sticking to the best cover fonts out there. Each genre has its favorites (some proprietary) but look at them and study them. Romance uses different fonts than thrillers and non-fiction. And while Stephen King’s latest Doctor Sleep uses a type face made in photoshop (and quite successfully I might add) don’t try it yourself; this is the realm of the professional.

4. And please try and stay away from black and red (I’ll slap myself later), it’s becoming trite and hard to read. Be creative and interesting and the cover does not have to tell the reader what’s in the book, in fact let surprise be your mantra.

Production:
It has been a trying summer (three versions of the same book, one brilliant new detective story, and the return to the O’Mara Chronicles). I thought I had a final product for the first version of the 160K word

novel but after some comments from agents I blew it up, shortened it, decided on a trilogy, met with a great story editor, stuck in some C-4, blew it up again and now have a shortened WWII thriller. From epic novel, to serialized story, to trilogy, to shorten epic novel, to Nazi thriller – ah the life of a book. The detective story (and sequels) grew out of the pieces left lying about from Samurai attack on the “epic,” the pieces are good for at least three detective thrillers – very cool. And Sharon O’Mara is now back on the front burner and I am definitely turning up the heat, I promise a New Year’s surprise or very soon thereafter.