SEVEN HOURS TO BARSTOW AND THE MERGER OF IDEAS 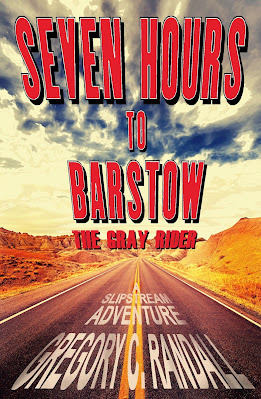 Experiment gone bad, that’s all I can say. As you can read below, back in August, I was high on the use of Amazon’s newest trick, VELLA. A new source for serialized electronic books in a half dozen genres. Everything I have read (and on YouTube) about the experiences of the users was negative. No marketing support, hard to use, hard to find your own serial, etc.

It’s an irreverent road trip down the back side of the Sierra Mountains. Enjoy.

To quote the first paragraph:

Don’t do this if you’re sober, or straight, or even got your head on right. No one should do this—ever. You must be certifiably stoned, plastered, over-religious, missing a body part, even a Democrat. This is what it takes: peyote, a lid of LSD, a handful of Cubans, a bottle of mescal, the Bible, and one of those anti-COVID masks. You need seventy-five horses between your legs, steel and chrome up the ass, big tires, a bag of Snickers, and Johnny Cash bleeding his fucking heart out and crying about June over the speakers. That’s all it takes, that and a plan; oh, and a Teflon jock strap printed with the fucking Milky Way hand-stitched with gold thread.

The publishing game is getting crazier. There’s more consolidation in the future (big fish eating other big fish). A year ago, Penguin Random House (already a collection of imprints) announced plans to buy/merge Simon and Schuster (another collection). Here it is one year later and it’s, as far as I can tell, not been consummated. The Gov’ment is stepping in, a little concerned about the free market and monopolies – which I find to be quaint and self-serving. Hillary Clinton’s thriller (with Louise Penny) is at Simon & Schuster. Barack Obama’s first volume, A Promised Land, is a Penguin Random House, Michelle Obama’s Becoming, Crown (owned by Penguin Random House). Kamela Harris is also with Penguin books. To balance, Dick Cheney is with Threshold (Simon & Schuster), and the apolitical John Grisham is with Knopf (Penguin Random House). To balance this out even more, James Patterson (and President Clinton - new mystery series) is with Little, Brown and Company (part of the Hachette Book Group), and Nora Roberts is probably keeping Macmillan Publishing alive. No sour grapes here, but more of a concern over the concentration of thoughts an ideologies in the hands of a few on the streets of New York. Also note that Simon & Schuster is owned by ViacomCBS (talk about eyeball coverage).

There are dozens if not hundreds of smaller publishing houses, groups, and companies. Some were established to support a particular writer, then grew. Others came into being because a person loved the idea of a genre such as sci-fi, westerns, or romance. But it still is a business, you must sell books (paper, ebook, audios) to survive, and it is getting tougher. I know this well.

This publishing merger (and others) all about control, control of the market, control of the message (thoughts), and control of the politics. Books are the preeminent force of change, education, and enlightenment. In reality, who cares about a chip company merger, a tool and die conglomerate, two automobile companies forming an alliance. But two companies under the control of a particular political persuasion, now that is a different type of monopoly. After the invention of the Guttenberg press, the powers that be (state and church), feared what would happen when knowledge was easily acquired by the people through cheap books and pamphlets. Would Martin Luther (for better or worse) have had such a profound impact if the printing press had not been invented only forty years before his birth? He used it deliberately and sharply, to both government and church dismay.

Mein Kampf, written by he who will not be named, is a preeminent example of how words can change a nation – and how a publishing house was acquired and used to disseminate that ideology.

I am very concerned about concentrations of power (or aquisitions) for whatever reasons or rationalizations. Free and open competition is the backbone of capitalism, whether in goods, services, or words. It is imperative that more than a glossy review be taken of this merger. I could care less about pricing (the merger will help keep pricing fair – phooey), this is about control of ideas, the words that make those ideas real, and the minds that are manipulated by those words.