Midnight in Europe, A Novel by Alan Furst 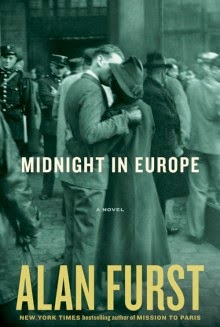 Tomorrow evening (June 27th) at Book Passage in Corte Madera Alan Furst is talking about and signing his latest per-World World II novel, Midnight in Europe: A Novel. I have a great fondness for Mr. Furst’s work, he has written thirteen novels whose stories tell of people living in a Europe that know that soon their lives will be thrown in the abattoir of a war that can not be stopped. Each character plays their part, in some small way, hoping to prevent what they know to be inevitable – Hitler’s fascist war against the peoples of Europe.

In Midnight in Europe Furst tells the story of one year in the life of attorney Cristián Ferrar, a Spanish émigré living in Paris, and his involvement in helping to provide arms to a collapsing Republican Army in Spain. As a member of an international law firm Ferrar travels from New York to Paris to Poland and Odessa in an attempt to facilitate the movement of heavy arms and ammunition from eastern European countries across the enemy lands to ports where these armaments can reach the communists in Spain desperately fighting Franco and the Nationalists.

It is a story of changing alliances, intrigues, and for Ferrar numerous assignations, romances, and potential betrayals. Most characters in the story don’t trust oe belive their associates and while the battle is between the communists and the fascists we begin to understand through Mr. Furst’s pen, that a Spanish Communist is very different than a Russian or Parisian communist. Their political desires are very different and often are at cross-purposes. As Mr. Ferrar and his associate and arms merchant Max de Lyon, travel through Germany to complete an arms arrangement they are stopped at the border at a Gestapo checkpoint and interviewed by thick necked officer with colorless hair, a Major Schwalbe. He inquires about their reasons for traveling in Germany. De Lyon answers quickly with their prepared story; they are there to take photographs for their magazine and its special issue of Nudism in the Reich. This puts the officer off his focus especially when he’s offered sample copies. Such is the craft of Alan Furst.

The novel is a series of interconnected vignettes that tell of people, simple working people, caught up in the growing conflict that would eventually lead to war. A ship’s captain surviving from port to port hauling illegal arms, a station master forced into facilitating the movement of weapons in box cars through enemy controlled lands, and most sadly the tale of Castillo in Madrid who paid ultimately to save the life of a beautiful woman – and spy.

The book is thick with detail and nuance, as are all of Mr. Furst’s novels. They are the stories of one person trapped on a single page of a war’s brutal endless manuscript where nothing is as it seems and conclusions never come.

As with most of Alan Furst’s books it is short by today’s novel standards at 272 pages, but is rich with color and depth.

I highly recommend it.