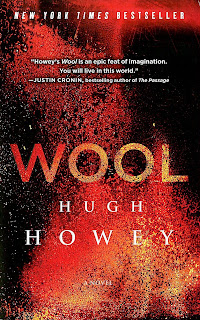 The novel Wool, by the American writer Hugh Howey, is the end result of a very successful five book series of novellas that Mr. Howey published through Amazon’s Kindle Direct Publishing (KDP). He chose this route so he would have the freedom of self-publishing. Initially released as 12,000 word, 60 page novelette it grew through a series of additional books until the full story was told. This was accomplished over a very short period of time starting in the summer of 2011. It is a brilliant success story that has resulted in the full novel being released through Simon and Schuster less than eighteen months later. I say through instead of by because Mr. Howey has retained a significant number of his rights as the author of the work. Something unheard in the publishing industry less than four years ago.

Here are some numbers as posted in the Wall Street Journal about the work (click here):

What is more stunning is how the publishing industry is finally facing up to the fact of the self-published author. For the last five years (post ebook) this staid industry has fought self-published writers. If I’ve heard more than once, “Oh, you have already published that on Amazon, we don’t work with writers who have done that!” I’ve heard it a hundred times. Howey sold a half million and they begged to print his book. Every industry needs to be shaken, if not just to knock some sense into the way some things have atrophied. The car industry (Japanese cars), housing (mass production), television (cable and CNN), and now books. Look at it as what Mr. Howey called, “A cleaning.”

Review
I didn’t read the series and to be honest I wasn’t even aware of the book and its impact on the publishing industry until last month. I’ve spent the last three years pulling together six books so my head has been elsewhere. Yet I have come to admire Mr. Howey’s work and publishing acumen – but what I really like is the story. It reminds me of my days in college and reading through Frank Herbert’s original 1966 novel Dune, where whole worlds are created with their own jargon, rituals, laws, and social structures. While Howey’s world isn’t a desert planet called Arrakis, it is even more frightening – it is the buried and self-enclosed world of a silo-like tube more than 140 stories deep. Every aspect of the reader’s fears of being buried alive, living in a claustrophobic world of spiral stairways, and tiny rooms is enfolded into the story. I haven’t read a book with such overpowering phobic weight, ever. All my visions seem to be filled with the life of living in a submarine, with no chance of ever surfacing. That said, Howey spins a wonderful yarn of social structures, self-imposed rules needed to survive, death verdicts served to preserve society, and hope. Classic dystopian post-apocalyptic fare, and thank god, no vampires.

During some century well into the future, man has succeeded in destroying his planet; the surface is now a toxic wasteland, where, exposed to the elements, it takes only minutes to die. How this happened to the world is never explained – and that’s good. This isn’t a story about the past; it’s a story of the future and hope. It is also the story of a few independent and curious people who stand against the silo’s systems, all trying to understand the why of why they are there. It moves quickly forward in fact it drives the reader, quick short chapters followed by long and involved narrations. There is a fine balance between dialog and narrative, there is little if any preaching (a failure often in these types of books), and the conclusion is satisfactory and open ended. Sequels??

There is not the sense, in the novel, of the original serial book release; the novel has been admirably crafted to blend the five books into one. It is well edited and crisp, if not a little wordy. If I have one criticism it is that during many of the action scenes Howey has such a clear vision of the interior of his world that we get lost in the twists and turns, the ups and downs and the ins and outs as the characters run, climb, fight, and escape within the silo. The story is a mixture of low and high tech, of makeshift solutions and conclusions without the characters knowing the why – all to the good.

What I did enjoy was the relatively few main characters, no more than eight or ten, in a "canned" world of thousands. If there is one aspect that can kill a great novel is a profusion of characters – too many is often too much. Wool is a political thriller, a love story, a psychological page turner, and above all a paean to great works like Mysterious Island, Dune, The Time Machine, and works by Philip K. Dick and even Robert Heinlein. It reminded me of Arthur C. Clark’s Rendezvous with Rama and his subsequent series. I hope that this novel of Mr. Howey begins a career that both challenges science fiction as well as the publishing industry as a whole.