The Curious State of the Publishing Industry 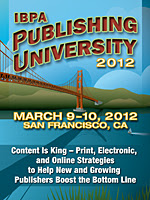 My CFO and I spent last Friday and Saturday in glorious San Francisco (if you can ignore the politicians) at the Independent Book Publishers Association’s (IBPA) Publishing University; I left shaking my head. The overall conference was great but some of the pieces of the publishing industry are ill fitting. And I also now wonder if some people in the publishing industry even understand the profound effects that are underway. Below are my comments about some of the speakers and subjects.
Ebooks:
Dan Poyntner spoke to the well-attended but ungodly early  7:00 Saturday morning pre-breakfast crowd about his history in self-publishing; for many this was their first taste of Dan. He is a dynamic and powerful leader in the industry and is someone who has the guts to demand that the hyphen be removed from e-books. Yes, it is now ebooks. But do we still need to call the alternatives pbooks? I ask you?
Ebooks come in so many different flavors that Baskin-Robbins could open a shop. There’s .mobi for Kindle, Epub for Apple, Nook, Sony Reader, Kobo, and others, good old PDFs, RTF, LRF (ancient), PDB for the failing Palm devices, and for the real crazies, HTML and Javascript (don’t ask). The reality facing writers and publishers is trying to understand what format is best for their work. For straight fiction it’s fairly easy with mobi and epub doing the heavy lifting, but when it comes to color it’s a whole new world. I’m holding judgment for a while. With the incredible colors in both the Kindle Fire and the iPad (and others as well), I believe that a more efficient format will be developed (probably based on one of the above, that will allow for efficient file sizes). Most children’s books are only valuable in color and PDFs seem to do the job, but again file size can be a problem. It’s also both the flowing text and disconnected image thing as well. Children’s books and graphic novels are very different than text manipulation – I’ll wait and see what happens.
What was even more exciting is that print-on-demand (POD) printers are now offering color and hard cover books – minimum orders of 25 copies. What a world, what a world!
Google:
I sat through an hour with a gentleman from Google who explained their efforts to be all things to all people. Social networking: Google+, Publishing: GoogleBooks, Maps: Google Earth, Search: Google, News. Well, you get the idea. Their presentation was confusing and very weak. They are trying so hard, with all their money, to capture every market in the digital world that they come across as a dyslectic institution with an extreme case of ADHD run by geeky twelve year olds. They are a long, long way from threatening Amazon.
Amazon:
Without a doubt Amazon is leading every effort at going digital. They help small and large publishers (both the big houses and self-publishers) to get their efforts before a growing audience. They also have put together a great program through their print-on-demand business, Createspace. And they send knowledgeable and helpful people (see below). I see better things coming from them.

Independent Bookstore (Indies):
They put up a great face against a publishing tsunami. Hampered by limited shelf space, time, and money, they must deal with the incessant demands of every writer with a paperback version of their ebook. Sales have increased with the death of Borders Books but Indies are still small businesses fighting the flood, i.e. Amazon and iBooks. A couple of hand claps for local bookstores Books Inc. and Bookshop West Portal (SF) for putting on a reality check for writers and real books. Both Neil Shofman and Margie Scott Tucker swept away some of the clutter and let some light shine in.
Social Media:
It’s everywhere and not one person has an understandable let alone successful business plan on how to use it to their advantage. Google+, Facebook (I'm HERE) - (yee Gods, I finally signed up, Sharon O’Mara has had her own page for months), LinkedIn which I really enjoy, and a ton of others. One social site, at the recommendation of another writer, immediately besieged me with invites from women named Olga and Elena and Inga and Ludmila – you get the picture. The say they are a travel site, don’t think so. If these are the places to go to find customers, then okay, but I’m still trying to figure them out and I don't speak Russian. And what is it with Goodreads, the trying to be social, by-collecting-all-the-books-you-are-reading, site. Their president, Otis Chandler, spoke and thoroughly annoyed me. He seemed disconnected and aloof. Is this the future of social media books? I hope not, especially when he avoided the question about his divorce with Amazon. We’ll see. And why is his site so hard to use?
Rock Stars:
Joel Friedlander again shows why he commands the respect of bloggers and book designers. Check out his site in the left column The Book Designer.
Joan Stewart showed how to make a few pennies from your blog that can build into real money.
Mark Coker founder of Smashwords is hitting his stride - watch this company, he is the man in e-publishing.
Thom Kephart, with Amazon, finally explained how to use Createspace, KDP (publishing for Kindle), and Amazon to a more than confused audience – I’m moving as soon as possible to Createspace for my print on demand (POD) books.
Eric DelaBarre, award winning filmmaker and speaker, showed how to make your book/movie trailers more effective. Most of us were just embarrassed by our own feeble attempts – but we will try harder. He is an outstanding speaker and has a good sense of humor as well.
A writer now has to know more than verbs, nouns and prepositions. He has to be a publisher of his own work, a marketing maven, and a geek. It's a very, very, brave new world. I’m beginning to get the shakes, again.
More later . . . . . .
Posted by Gregory C. Randall at 3/13/2012