I am away for the next few weeks on a serious fact finding trip to the Northwest. Rest assured that when I return keys will be flying and words pouring. My schedule, posted in February, is still on track. I look forward to getting back to Sharon and getting her out of Paris where she's been for over a month. Knowing her, she has eating through all 20 arrondissements.

Update #13 – I Invented the eReader

Let me tell you a true story. In the fall of 1988, the DOM (Director of Maintenance) and I were marlin fishing on the east cape of Cabo San Lucas. As usual we were very successful and celebrated heavily. There is nothing better than warm oceans, big fish, and cold beer (ask Sharon O’Mara). Throw in yellowfin tuna tacos and you could mistake the sharp blue sky and long hot beaches for heaven.
Stacked on our Spartan room’s table were 10 inches of books that we were reading, with today’s cost of baggage, their costs exceeded their value. Anyone who knows me knows I have a high level of creativity and the ability to come up with more ideas than I know what to do with. But it’s often the execution that’s the problem (in some educated circles this is called ADD). Me, I call it, “NEHITDS, Not enough hours in the day syndrome.”
Well, sitting there by the pool, cerveza in hand, I began to noodle in my journal. Could there be a device that would store all the books I wanted to read, to have all the information of the libraries of the world in your hand and not have to carry an extra ten or twenty pounds whenever we travel. Oh I know what you’re thinking, lot’sa people came up with that idea: Sony, Apple, Nook, Kindle, currently over thirty eReaders are available, and lord knows those people are a lot smarter than a drunk by the pool in Mexico.
A close friend, Paul, and I spent a good bit of time trying to build a business model around the thing - we knew it would be successful - but there were two issues that nixed it in the bud. The lack of a readable screen (this was fifteen years before the Sony screen), and the issue of writer/publisher copyrights (only took a few billion dollars to iron that one out). So, as are many good ideas, it was gently set aside, another beer was ordered, and as they say: “The past is history – Stevie ol’ boy, I could have been a contender!”
But this was years before the internet and ebooks. My point is simple, the eReader was going to be developed, it was only a matter of time. It’s now the proverbial game changer, whole publishing institutions are being shook to their foundations, printing companies are closing (I lost a great shop who was printing GI Town in Charlotte), there are mergers (another long story), and it’s a factor in the closing of Borders and other bookstores (local and national). I wonder how You’ve Got Mail would look under the new paradigm, would Meg Ryan’s character be gloating over the failure of FOX Books, would Tom Hanks wonder where it all went? Would he be trying to develop his own version of the Nook? Would she be excited by the new look at niche bookstores?
Well, to make a short story shorter, I finally bought an iPad. Of course I still call it my invention, and still scream into the wind that: “There, but for the grace of a design patent, go I.”
And the first books I downloaded were my own, so there!!
I can carry a couple of thousand books, more than enough to rebuild civilization (along with a solar charger). I can now download the Wall Street Journal, NY Times, Pravda, and the Traverse City Record Eagle. I can keep count of my calories, order Chinese food, book an airline ticket, the damn thing will even wake me in the morning (my dog somehow resents the intrusion). I can carry every picture I took, every favorite Lang Lang recording of Rachmaninoff, every Beach Boy album (pardon me, CD, or digital or whatever), and record my every thought, if I want. And I can listen to my favorite music over Pandora (highly recommended). There’s an app for that!
I am at a crossroads, we are traveling and for the first time in fifteen years, I will not be taking my laptop (that has, itself, shrunk from 8.5 lbs to 2.7 lbs.). The withdrawal, I hope will be worth it.
More later . . .
PS, Elk River has gone to my editor, see Dennis De Rose left column, top. Looking for a mid-summer publication date, cover art underway.
Posted by Gregory C. Randall at 5/11/2011 No comments:

Yesterday, the giver of all things fun (the UPS man) arrived with the first box, of what I hope are many, of the trade paperback version of Containers 4 Death. We went with just fifty for the first printing to start the marketing and getting it posted on Amazon. We have had the ebook version on Amazon and Barnes & Noble for almost two months. Even though I can never make money on the paperback after printing, shipping them (at least 3 times to get to the buyer), and the split with Amazon et al, having a real book in your hands beats trying to hug an ebook.
ADVERT: Please buy this book: 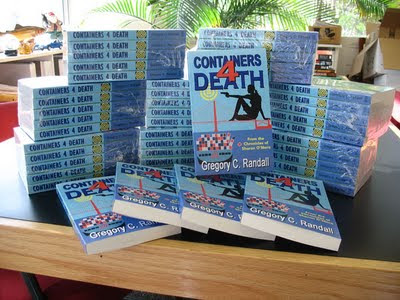 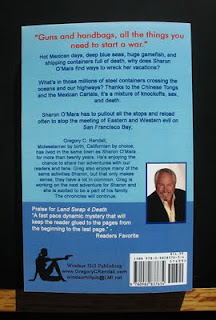 Back of Containers 4 Death 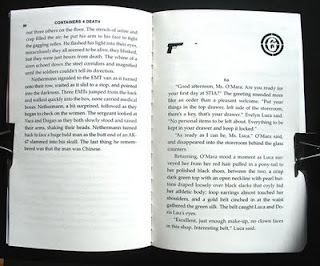 Interior Shot
If you are a loyal follower you know the trials I went through to get this book right. Redesign of front and back covers, rework of the text format, and concern over paper color; the proof now stands in a pile, Sharon waits for you!
I am continuing to edit Elk River (see previous blog), I had some excellent feedback from an editor/reader (a volunteer) and he offered a simple crit, the dialog needs cleaning up and sharpening, “It reads well, but let it flow, make it more human, this is not the literary society of Boston, these are good and simple folk from Chicago and Michigan.”
It is interesting to focus just on the spoken words of the story, scroll past the narrative and just look at the quoted lines, is the story being told? Are the voices evolving from within the ten main characters? Can you tell who is talking just by the speech pattern?
Without a doubt, editing is more critical to the story than the story itself (sometimes). Poorly edited work steals from the story; but there is a difference between proofreading and editing – a big difference.
Still working on cover art for Elk River, hopefully I will be able to post three or four versions for your comment within the month.
The next Sharon O’Mara Chronicle is waiting for the return of Sharon and Bryan from Paris; I understand they are having a great time. She is complaining that the sauces are far too agreeable. But lots of walking and occasional bursts of panic are helping her to keep her girlish figure.
More later . . .
Posted by Gregory C. Randall at 5/05/2011 No comments: